To mark the start of our topic about the Earth, children displayed their homework. Everybody had done some research during the holiday: some had made models of volcanoes; others had made posters and some had written computer presentations. Oliver had made a volcanic cake which we all shared at the end of the day (thanks go to his mum too!). Mr Alford explained about tectonic plates and we saw videos of eruptions - a brilliant day and start to the topic! Well done Year 6!

Welcome to the new building!

The builders finished our new building ready for the first day of term and here is the new classroom before we arrived and with us inspecting it for the first time! At the end of last term, we decided it should be known as The Studio. As well as the Year 6 room, there is also another classroom which will be used by Year 2 for small groups and a smaller room for our Year 6 groups.

Our second lesson on steel pans - working on a scale. 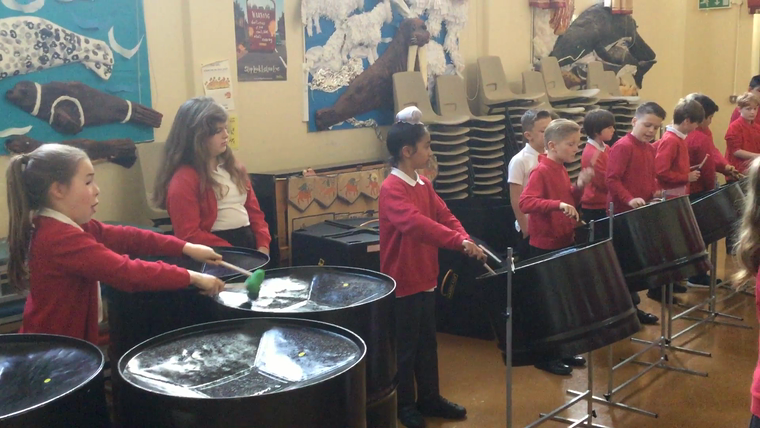 we heard all about just about every aspect of mathematical shapes and measures as we zoomed around the universe with Quantum Theatre this afternoon. Children were busy converting units of measure so they could solve problems. Angles were drawn and compared. Shapes were sorted too! Next term we spend a lot of time on our Geometry unit of work so we need to know all about shapes and measures too!

We spent some weeks brushing up on our Geography skills, learning about Europe.

We began with a jigsaw - everybody had a piece - some countries to colour and cut out.

Then we assembles them in a giant jigsaw which is now on the classroom wall.

Didn't we do a great job!

PS the 'Stone Age' label is part of the timeline which runs around our classroom. We have the present day to the Stone Age but to put on the dinosaurs (on the same scale), we would have to go all the way to Milton Keynes!

The Tastiest Calendars in school!!!

We made edible calendars which featured Santa Claus, presents and Christmas trees.

They are not likely to last beyond the end of the holiday! We also made the boxes and decorated them with Christmas greetings.

We have been learning about electrical circuits. Our Christmas cards have circuits built into them so the as we move the slider, an LED bulb lights up in our picture. How cool is that!!!!

We all wore a Christmas jumper and the money raised went towards a number of charities including Save the Children and Macmillan Cancer Care. Please check the Newsletters to find out how much was raised altogether.

Here we are performing the song 'Don't Laugh at Me' in front of the whole school!

We are testing electrical circuits. We found out that the greater the number of calls, the brighter the bulb - but not too many or it breaks!

Cooking up a Vegetable Stir Fry

Miss Cunningham and Mrs Woodford from Beauchamp College led 2 cooking sessions in our class. During the first, we prepared vegetables for a stir fry. Most of us enjoyed eating it too!

We have been reading Roald Dahl's The Witches and our pictures (in the style of Matisse) feature an early part of that brilliant story.

During September, we spent a week trying out lots of outdoor and adventurous activities including high ropes, canoeing, climbing archery and bushcraft. We all had a brilliant time!

We were investigating how mixtures of solids and water could be separated.

We tried out sieves and filtering.